What is cryptocurrency:  21st-century unicorn – or the money of the future?

This introduction explains the most important thing about cryptocurrencies. After you‘ve read it, you‘ll know more about it than most other humans.

Today cryptocurrencies have become a global phenomenon known to most people. While still somehow geeky and not understood by most people, banks, governments and many companies are aware of its importance.

In 2016, you‘ll have a hard time finding a major bank, a big accounting firm, a prominent software company or a government that did not research cryptocurrencies, publish a paper about it or start a so-called blockchain-project.

But beyond the noise and the press releases the overwhelming majority of people – even bankers, consultants, scientists, and developers – have a very limited knowledge about cryptocurrencies. They often fail to even understand the basic concepts.

So let‘s walk through the whole story. What are cryptocurrencies?

Few people know, but cryptocurrencies emerged as a side product of another invention. Satoshi Nakamoto, the unknown inventor of Bitcoin, the first and still most important cryptocurrency, never intended to invent a currency.

In his announcement of Bitcoin in late 2008, Satoshi said he developed “A Peer-to-Peer Electronic Cash System.“

His goal was to invent something; many people failed to create before digital cash.

After seeing all the centralized attempts fail, Satoshi tried to build a digital cash system without a central entity. Like a Peer-to-Peer network for file sharing.

This decision became the birth of cryptocurrency. They are the missing piece Satoshi found to realize digital cash. The reason why is a bit technical and complex, but if you get it, you‘ll know more about cryptocurrencies than most people do. So, let‘s try to make it as easy as possible:

To realize digital cash you need a payment network with accounts, balances, and transaction. That‘s easy to understand. One major problem every payment network has to solve is to prevent the so-called double spending: to prevent that one entity spends the same amount twice. Usually, this is done by a central server who keeps record about the balances.

In a decentralized network, you don‘t have this server. So you need every single entity of the network to do this job. Every peer in the network needs to have a list with all transactions to check if future transactions are valid or an attempt to double spend.

But how can these entities keep a consensus about this records?

If the peers of the network disagree about only one single, minor balance, everything is broken. They need an absolute consensus. Usually, you take, again, a central authority to declare the correct state of balances. But how can you achieve consensus without a central authority?

Nobody did know until Satoshi emerged out of nowhere. In fact, nobody believed it was even possible.

Satoshi proved it was. His major innovation was to achieve consensus without a central authority. Cryptocurrencies are a part of this solution – the part that made the solution thrilling, fascinating and helped it to roll over the world. The transaction is known almost immediately by the whole network. But only after a specific amount of time it gets confirmed.

Only miners can confirm transactions. This is their job in a cryptocurrency-network. They take transactions, stamp them as legit and spread them in the network. After a transaction is confirmed by a miner, every node has to add it to its database. It has become part of the blockchain.

For this job, the miners get rewarded with a token of the cryptocurrency, for example with Bitcoins. Since the miner‘s activity is the single most important part of cryptocurrency-system we should stay for a moment and take a deeper look on it.

What are miners doing?

Principally everybody can be a miner. Since a decentralized network has no authority to delegate this task, a cryptocurrency needs some kind of mechanism to prevent one ruling party from abusing it. Imagine someone creates thousands of peers and spreads forged transactions. The system would break immediately.

So, Satoshi set the rule that the miners need to invest some work of their computers to qualify for this task. In fact, they have to find a hash – a product of a cryptographic function – that connects the new block with its predecessor. This is called the Proof-of-Work. In Bitcoin, it is based on the SHA 256 Hash algorithm. 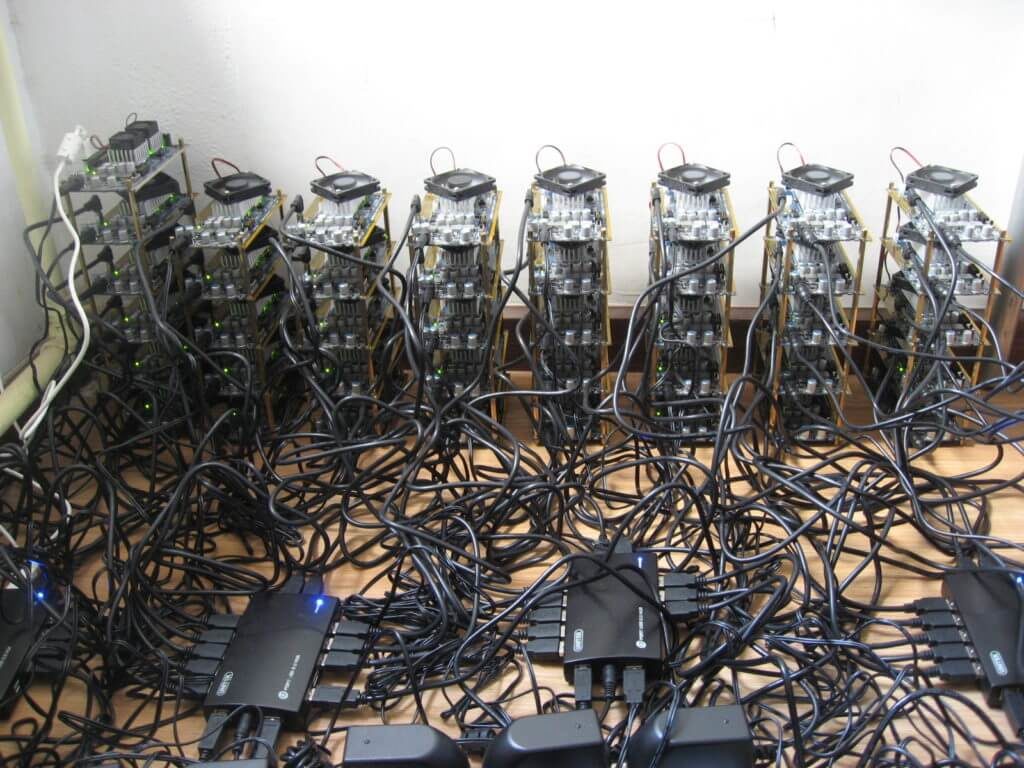 You don‘t need to understand details about SHA 256. It‘s only important you know that it can be the basis of a cryptologic puzzle the miners compete to solve. After finding a solution, a miner can build a block and add it to the blockchain. As an incentive, he has the right to add a so-called coinbase transaction that gives him a specific number of Bitcoins. This is the only way to create valid Bitcoins.

Bitcoins can only be created if miners solve a cryptographic puzzle. Since the difficulty of this puzzle increases the amount of computer power the whole miner’s invest, there is only a specific amount of cryptocurrency token that can be created in a given amount of time. This is part of the consensus no peer in the network can break.